First off, an apology to all of you who are on the RAMPAGE mailing list, and who have not received a mailer in AGES... I encountered an issue with updates and such, and became really busy at the same time.  I'll work on sorting that out and also on getting you guys something fun and exclusive on offer!

OK - down to current events business!  This Fall is going to be CRAZY!  It will start with SUPERFESTIVAL 66 - where I will be sharing a booth with my good friend Brian, The GALAXY PEOPLE.  Not yet sure of the booth number, but here's the link to the webpage (japan site):

I'll be bringing NEW TOYS to SUPERFESTIVAL!  This will see the reveal of the brand new RAMPAGE TOYS line - the Kaibutsuya ('Giant Monster Animal Shop')!  I shoud be getting the test shots of this thing soon (maybe today!), so keep your eyes peeled for pictures.  I will also be bringing a smattering of other fun stuff - new micros (painted versions by me as well as BLOBPUS!), new UU's, a few customs and maybe one or two other new toys!


Soon after SUFES is over, I'll be hopping on yet another airplane for a tip over to the East Coast - for NEW YORK COMIC CON!!!  My Buddy Benny, of Tenacious Toys Fame, was kind enough to organize a space for me and TRU:TEK in the Tenacious Collective Booth - Booth #208.  This will be a HUGE chunk of "The Block" - featuring toy makers and such from various walks of the scene.  Here's the (current) full run down, on the Tenacious Toys website:

And here's the promo postcard.  Fun Comic-cover-style on this! 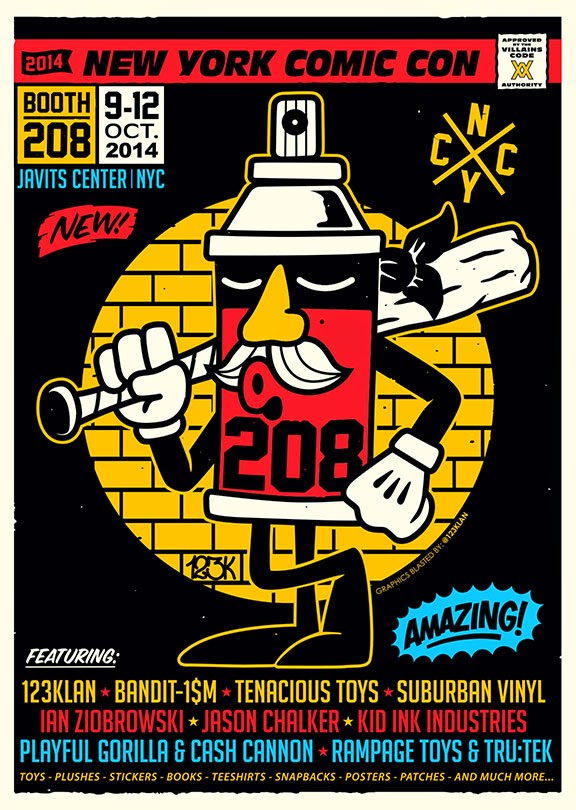 I will be bringing a lot of stuff over for NYCC - here's the best list to date:

SPLURRT will also be making an appearance at the space - dropping some of his figures, and (at the same time) I will be releasing a RAMPAGE version Cadaver Kid (full run) and some Lab Mice customs (including mash ups using Bodies from The GALAXY PEOPLE).

That's all for now.  Keep an eye here and on Instagram (especially) for updates and photos and such!