It's official!  I made the big time!

Well, some might say that and some might not.  But. no matter, I'm super excited to finally sit down and write this post about what I see as a pretty big deal, and a serious accomplishment for me as a toy maker.

Actually, Godzilla has already been unleashed.  Countless versions of this ultra famous Japanese movie monster have been around in every form possible - since way way back when Godzilla was birthed on-screen in 1954.  The Japanese (and non-Japanese) soft vinyl takes on this character have ranged from smooth to rough - from cute to scary - from man-in-suit to straight up serious 'lizard gon' whoop yo ass' realistic.  So, when the initial licensing OK for the RAMPAGE version of the OG 1954 Goji came through (MASSIVE thanks to Medicom Toys' Akashi-san for making this happen), what was I asked to do? -  I was tasked with doing something 'different.'

Somebody over at TOHO had seen my Ultra Kaiju work (RT x Marmit production - still in progress!) and my Kaibutsuya dudes (Kesagake, Two Toed Tom, etc.) and thought I would have no trouble  veering from the myriad of other Godzillas that have been made since forever-dom, and coming up with something unique to me.

Thus I set to work sculpting in paper clay, with a vague idea of what I would do, and the only REAL guidelines being: 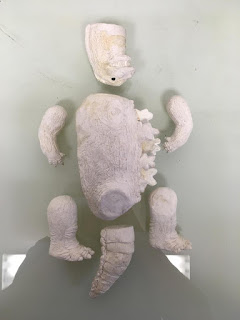 What materialized was the basic shape of a vaguely 'SD' (Super Deforme) Godzilla (above) - with a stretched out neck, chubby thunder thighs and little T-rex arms.  Apparently this initial rough crap sculpt was enough to keep the interest of TOHO, and I was granted permission to proceed to WAX.

Now, I have poured a ton of silicone, and I have ALWAYS hated doing so.  With that in mind, I got my buddy Josh Kimberg (Clutter, Dethchops - that guy) to make my silicone molds for me.  This isn't so much a vital piece of information - just a shout out to an awesome friend who saved me from the accursed silicone disaster that I had become so used to dealing with. 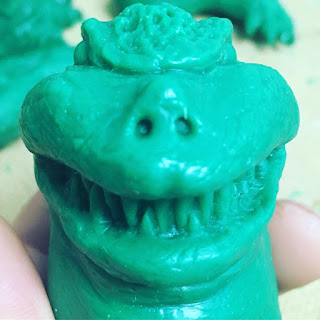 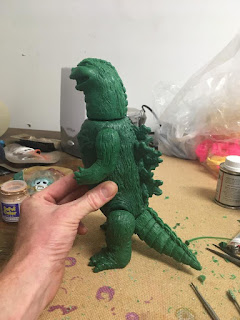 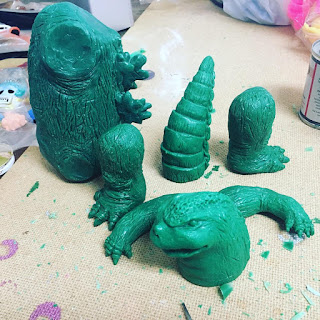 In the wax I went nuts with the scratching and melting and general fixing of the initial shape.  The body took on a proper Godzilla-skin-texture feel, the spines were shaped to be pulled (hopefully) in sofubi, the toes and fingers were made to look more like, yep, toes and fingers, and the finer details in the face (around the eyes and snout) were put into place.  With the changes made, I sent off photos for approval, and was excited to get a proposed release and sales schedule in response!  Yay!  But also, not yay, because the whole thing meant that I would never have a proper jointed sofubi figure in hand to paint and play with before the world was to see my creation.  THAT meant that I would have to provide a paint master using... the crap-sculpt clay prototype...  Well, I tried to dress up the old...(how does the saying go?), and thus we got the image that everyone has been seeing to date: 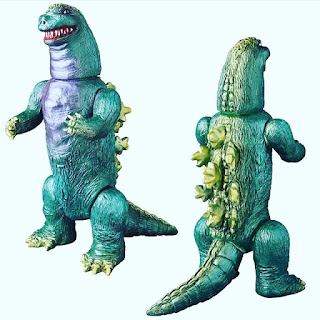 Well, no sense stressing - even THIS picture kept the TOHO people excited, and everything - Wax and Painted 'clay prototype' - hopped in a bubble-wrapper filled cardboard box and headed off to Japan!

Up next, I had to put some thought into the packaging.  Didn't take my turning on the thinking cap for too long before it struck me that one person in particular would be perfect for the fun and awesome header art I had in mind - BWANA SPOONS!  And, in keeping with the 'things seem to be panning out ok' theme, Bwana accepted and delivered!  Here's an early photo of his art for the GOJI header: 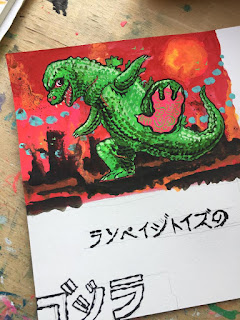 I was recently in Tokyo and was able to meet with Medicom and the workshop that is handling production.  Once again, things went smoothly (aside from a couple days when it was unsure who had the wax prototype - they found it - yes!).  And now we are at the joints and molding stage of the process.  This point is of critical importance.  Nobody wants a cool looking toy that stands all funky - or, even worse, doesn't stand (NOOOOO!!!!).  No worries though - things are in Capable hands. 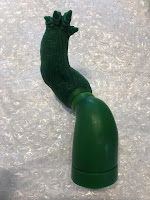 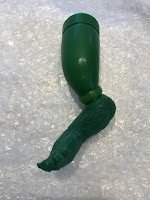 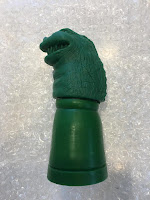 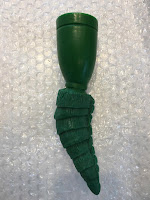 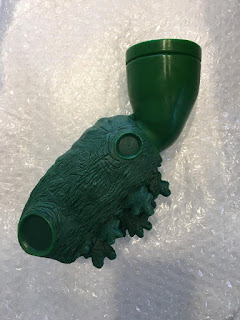 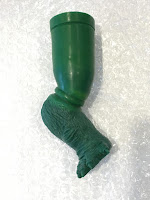 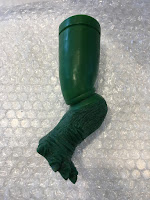 The tapered joints will really pull the whole figure together.  Seeing these photos from the mold maker make the whole project 100% real.  Psyched!

OK, so now the figure is available for pre-order via MEDICOM TOY's assorted webshop outlets, with an expected delivery date of Late January.  This intitial release was timed (or rather constricted by timing) based on a late fall cut-off for international sales of the MEDICOM GODZILLA WARS series.  In other words - this squeezed in just in time to allow for an intial international (read: outside Japan) OPEN PRE-ORDER for this figure.  Which leads me to this:

Please please please do yourself a favor if you are hoping to buy one of these figures and don't give extra money to skeezy dirtbag re-sellers or buyers.  You can get this toy AT RETAIL (as many as you want I believe), so please do.

Those interested can look HERE for info on snagging this dude.  The open order window lasts though 10/31 (the end off this month), so you can consider the purchase in quiet without F5-ing the damned site or any of that tom-foolery.

So, what's next in RAMPAGE world?  The saga continues!  Stay Tuned! 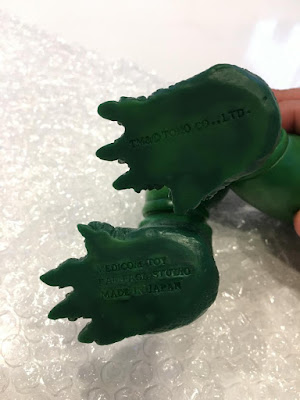 A final note:  This project is being produced in Japan.  The mold, the paint masks and the vinyl figures will be made by Japanese artisans.  The releases will be painted in Japan by Japanese painters.  This is important.  This is what makes so many awesome toys what they are.