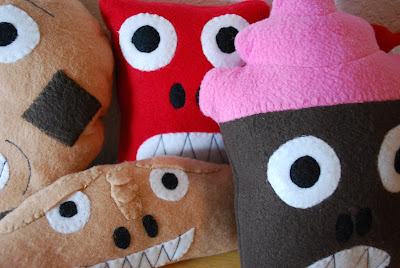 Welcome to a new RAMPAGE blog posting!!! I hope this finds you all well, and surrounded by mounds of RAMPAGE toys and other such awesomeness!!!
Anyway, after being in the works for ages, the RAMPAGE plush series is in production and out for sale. These cute, cuddly, fuzzy (and ankle-biting) fellahs are up for sale at Monster Art and Clothing (<--click for more info) in Ballard, Seattle. They will also be up for grabs on the new RAMPAGE TOYS Etsy page (http://rampagetoys.etsy.com/). Bear with me while I get things up there, and do feel free to contact me if you need a cuddly companion immediately!
Marketing jargon aside - here it is: the first run of the RAMPAGE plush line - fresh off the sewing machine!!!! We've got Choco-chip, B-Scotty, Cupcake and Jellyo (who you'll be introduced to in an upcoming post - I know, you were worried). 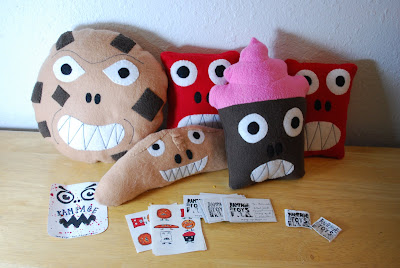 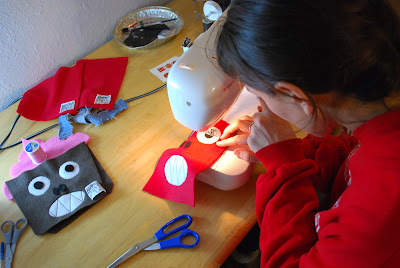 Above: my wonderful RAMPAGE assistant, hard at work on the Singer! Making toys is FUN!!!

Also, don't forget t get you RAMPAGE TOYS t-shirt! You can send me a blank shirt to screen print, or put in an oder for a size and prefered color. 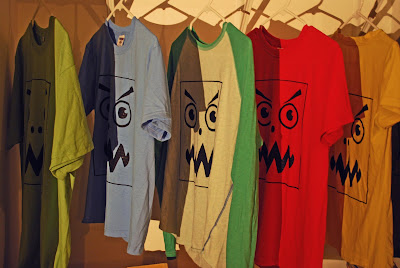 Time for more RAMPAGE profiles!
This time around you'll get the nitty-gritty on Devil Dawg, Choco-Bar and Choco-Chip - the 'Choco-Fiend-Trio'!!!! So, without further ado: 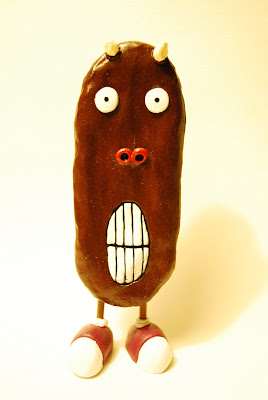 Devil Dawg: Cast from the depths of HELL (actually the subburbs of Northern Jersey, but what IS the difference really?...) by plaintive neighboors, after throwing one too many wild parties, Devil Dawg fled to greener pastures in the greater Pacific Northwest. Free from a stressful existence amidst his Drakes Cakes Fraternity (<--yes, this is hyperlinked), he discovered the wonders of the mountains and the relaxing company of new friends. Devil Dawg now spends his days plotting world dominion and sipping Mac'n Jacks along with his partners in crime: Choco-Bar and Choco-Chip. Choco-Bar: At some point, this tasty fellah' found himself boarding a ship in Brazil bound for Portland, Oregon. What attracted him there? Was it the vibrant music scene, the myriad of watering holes, or the moderate climate? - all of the above? What we know for sure is that Choco-Bar knows how to rock out on the drums, and his penchant for loud music eventually led him to team up with Devil Dawg and Choco-Chip to form the 'Choco-Fiend-Trio.' 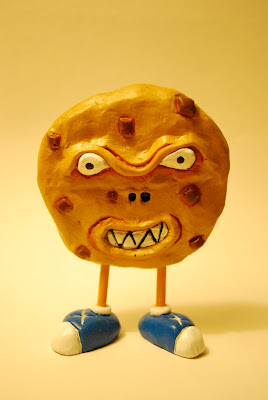 Choco-Chip: Grandma Fruxbee of the UP, Michigan was terrified when one day she opened her oven to behold Choco-Chip and his sharp pointy teeth!!! Like many hip Midwesterners who yearn to escape lulling boredom and snowy winters, Choco-Chip joined the western migration to Seattle (<-- also hyperlinked). The long rainy season of his new home provided ample opportunity to hone his rockin' guitar skills. Choco-Chip loves mexi-fries and pop!

Hallo!!!
This post will be short but colorful. Yay! As I mentioned in an earlier post (10-29-2009), Japan is just littered with cuteness, and what better way to preserve the vivid memory of kawaii (Japanese for 'cute') than in the semi-immortal form of a plastic toy! After all, plastic will outlive all of us (in a purely chemical sense)...
So, long story short, the Tokyo bus system mascot looks like this: 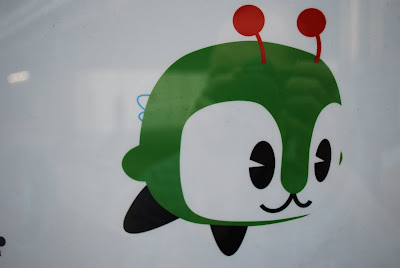 As soon as my wife saw this cute little guy, she mentioned she just might like to see him in toy form (she thought Santa's Elves just might make him...), and here he is! Enjoy! 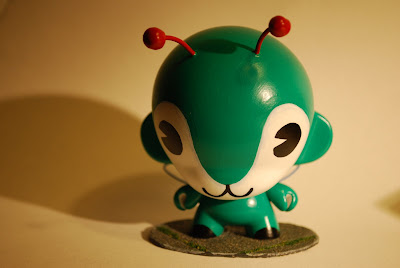 The head is that of a Kidrobot Minny Munny, and the body was salvaged from a rather ugly Kidrobot Dunny (you never know what you'll get in a blind box...). 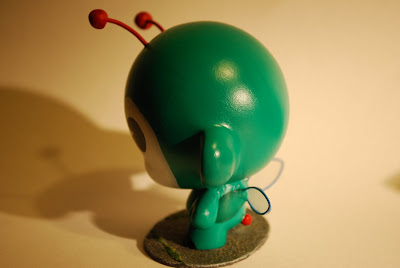 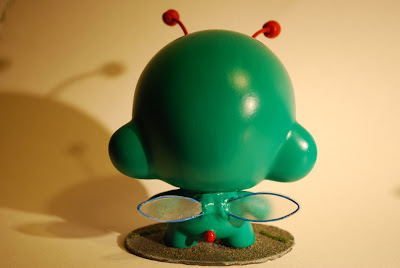 I'll return to the RAMPAGE characters' stories soon. It's been a busy time - in a good way. A lot has been happening, and production is ramping-up in the RAMPAGE TOYS world!!! Much more to come SOON.