Prior to the Christmas Holiday RAMPAGE TOYS were unveiled en Masse at MONSTER Art and Clothing in beautiful downtown Ballard. This super cool shop stocks a ton of fantastic art - all creations of local (to the greater Seattle area) artists. Stop in (5000 20th Avenue Northwest) or check out the website (www.monsterartandclothing.com), and get yourself some RAMPAGE TOYS!!! Don't delay - the first edition of RAMPAGE is a limited run (numbering about 40 total), and they are selling like hotcakes!!!

Motivated by popular demand, the characters that are RAMPAGE TOYS will begin to develop personalities, and you'll learn all about them right here on the RAMPAGE blog. I'll cover a couple toys in a series of posts over the coming weeks. So, without further ado: 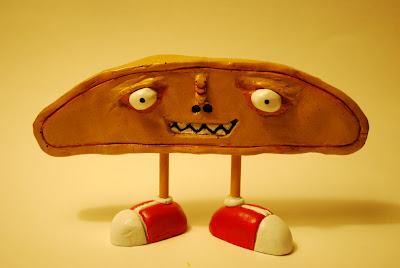 B-Scotty: This timid fellah has a soft side - but he'll still eat you! (a little at a time... if you let him...) B-Scotty weighs in at a massive 12.3 ounces; where DOES he put it all... so fit and healthy. WATCH OUT! He's gonna bite your little toe! Truth is, B-Scotty comes from a small town in Southern Italy, but has recently moved to Rome where he rents a nice hollowed out bust. He speaks Italian and a little german - this helps him handle all the tourists. His favorite movie is "Attack of the killer Tomatoes," and his favorite food is kittens - which he finda a plenty on the streets of Rome. 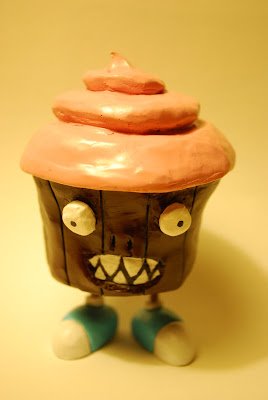 CUPCAKE: Sweet as can be, and full of chocolatey goodness, Cupcake is perhaps the star of the RAMPAGE series. With his razor sharp teeth and 15 ounce mass (he's a bit hefty.... but he IS snack food after all!) he can easily overwhelm unsuspecting infant mice, which just so happen to be his prefered dietary staple! Cupcake was born and raised by a family of Vanilla cupcakes, who shunned him and sent him out to face the world alone after realizing his ingredients would just never been like theirs... He now roams the streets of Seattle searching for something to make his life more complete. What is it? Will he ever find it? Will he even be happy if or when he does?....