Superfestival has come and gone, and I'll do a full-on write up about it (and the Bwana show at gargamel) soon. But here's a quick note to let you know that SF Exclusives that are still remaining are now available in the Rampage Toys BigCartel shop! Go ahead and check them out here: 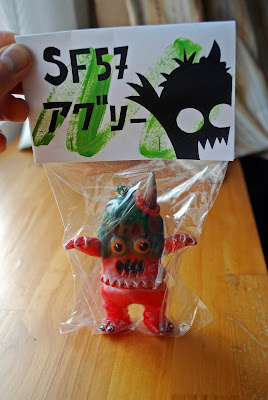 Ugly Hath Arrived on the Scene!

Hey Folks! Time for a quick update before I jump on the night bus - headed for Tokyo!
The UGLY UNICORN is in full swing! I got the first box of blank vinyl 2 days ago, and yesterday was a day of nothing by painting! I'm excited beyond belief that this project is happening, and I'm also psyched on the first painted runs.
So, without further delay, here are pictures: 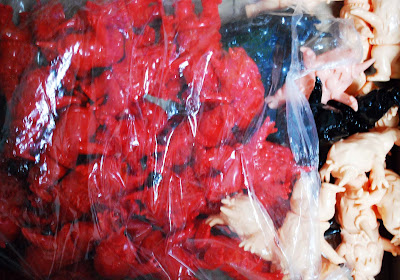 Bag of candy! The whole house smelled like vinyl for hours :-D 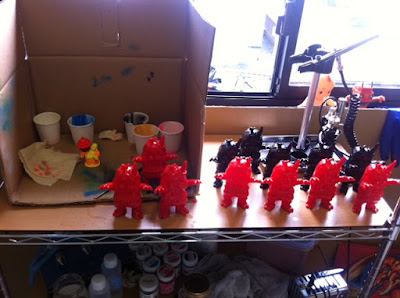 The airbrush studio - ready to go! 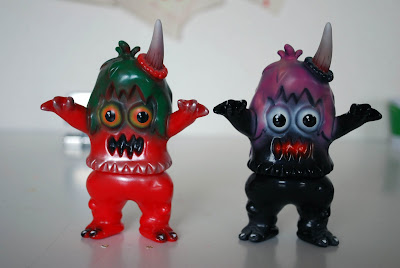 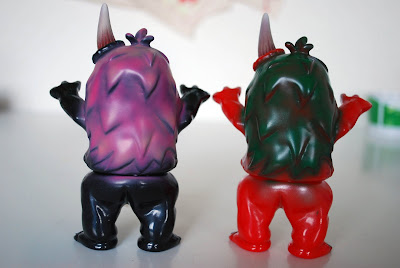 Two painted runs for SUPERFESTIVAL on the 25th in Tokyo! "Allsorts Liquorice Ugly" and "Poppy Goji Ugly"!!! I had a blast painting these and can't wait to paint more - for NYCC ;-) 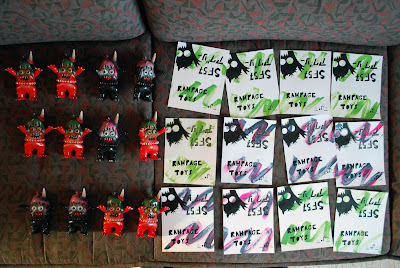 Did some simple painted and screen printed headers for these two releases. I love header cards - it makes a toy into a 'whole package' for me!
If you're in Tokyo on the 25th come by and say 'hi' at Superfestival - and get a chance to grab these figures first! Leftovers will go up in the shop on the 27th in the morning - also known as the 26th in the evening/night in America ;-) E-mail reminders will go out to the mailing list.
One last note - pre-ordered blanks will go out in the mail on Friday!
Thanks for stopping by the blog and reading up on UGLY's progress!
Posted by Jon at 2:31 AM No comments:

Making a Sofubi - How it all works!

OK, so, perhaps some of you have checked out the blog, and you get the resin thing, but aren't into the vinyl - or maybe you ARE into vinyl - regardless, for anyone on either side (or both sides) of the coin, perhaps you haven't gotten the full story on how the whole vinyl production process works. There are many steps to making a vinyl figure (no matter where you do it), and this summer I finally got the full story laid out in front of me - almost entirely all first hand; as a result of the UGLY UNICORN project. I can finally say I have seen just about every step in the process of making a Japanese soft vinyl (sofubi) toy, and I've taken pictures and videos along the way - So, I figure it's time to share! The process is VERY hands-on - at every step there is a craftmans/artist/artisan working with raw material and creating an item. There is next to no machinery involved, and that which is used is operated by one person. The figures produced are, in my mind, as hand-made as any resin figure - though the processes and materials are slightly different. The experience of making a figure has been SUPER eye-opening, and makes me appreciate my own collection just that much more!

Without further adieu, here it is, an intensive multimedia overview: "Making a Sofubi Start to Finish"

1)You need an idea! Let's say a painting/drawing - a character essentially. For example the Ugly Unicorn ---> 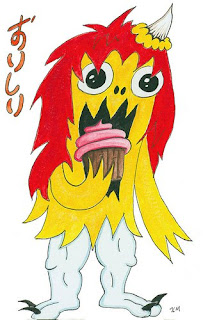 2)A sculpt needs to be done. Normally this is done in clay (sometimes in wax - depending on the preferences of the artist doing the sculpting). This is generally refered to as the "Clay Proto" (Clay Prototype) - it's your master copy of your figure and should basically be the final form of your figure once completed. Here's part of the Ugly Unicorn - sculpted in clay - and visible behind him, a clay proto by Paul Kaiju - his Seagool ---> 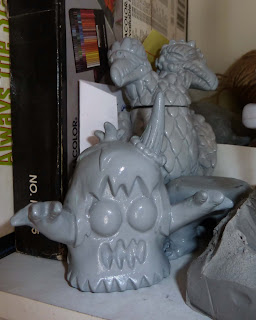 3)A wax casting is needed of your figure in order for a metal mold to be made. For the Ugly Unicorn, this piece looked like this... ---> 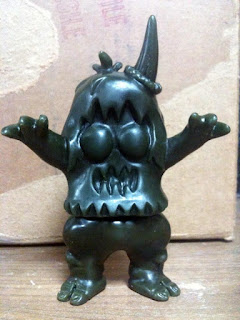 ....and it was made by the following process:

3a)The clay proto is molded (usually with silicone - the same material used for resin figures' molds). This is the mold for the UGLY UNICORN ---> 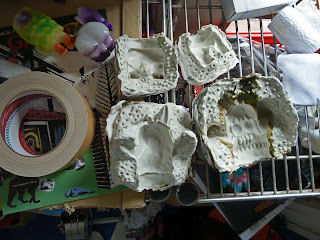 3b)Wax is poured into the mold - giving you the 'Rough Wax Proto' (Wax Prototype).

3c)The rough wax proto is smoothed and made nice and shiny - like the one shown above. The finish on this piece will be the finish on your final vinyl casts, so this step is SUPER important! Artists like Ricky Wilson (Velocitron - http://www.velocitron.org/), and Luke (Lulubell Toys/ Grody Shogun - http://www.lulubelltoys.com/) work in small studios in Japan (many being in Tokyo - it is the epicenter of this process), to help artists take their designs from concept to toy. These guys do A LOT of work on the wax for figures designed by artists in many countries (Japan and the US being a couple of the larger contributors), and they also make their own awesome creations! On top of it all, these are the guys doing all of the brokering with the factories (building relationships, ordering liquid vinyl, and getting in orders so artists get figures for events like SDCC and NYCC). Ricky and Luke in particular are working hard to keeep the torch burning in the Japanese Soft vinyl scene - putting new stuff out and promoting and assisting others who wish to do the same - HUGE thanks to these guys for what they are doing! Here they are; hard at work in their studio ("The Fort") - smoothing wax during a hot day in Tokyo this past August ---> 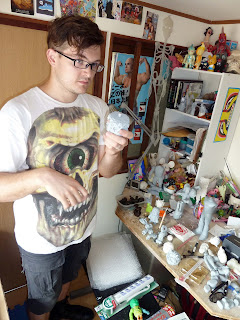 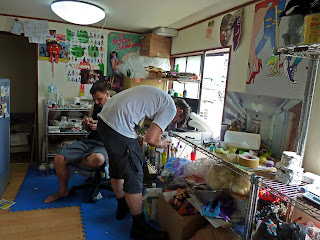 4)The wax proto is very gingerly handed over to the mold maker, who makes the final (and damn near immortal) metal mold for the figure. This process involves: a)electro-coating the wax proto with copper, b)melting the wax out from inside the mold (yep - hours and hours of work... melted and swept away in seconds...), c)welding the copper mold to a steel frame for use in the factory/workshop where the vinyl will be cast (note - the balance of the mold is SUPER important, so this is no slap-dash welding job!). This is the one stage where I was not able to see things as they were done... However, here are some molds that were used to make some really popular figures for this year's Sandiego Comic Con (the Cannibal F**kface), and for one of my favorites - UAMOU! ---> 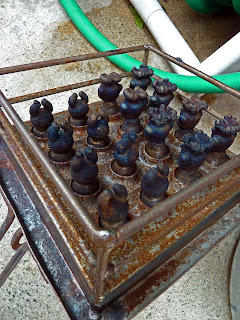 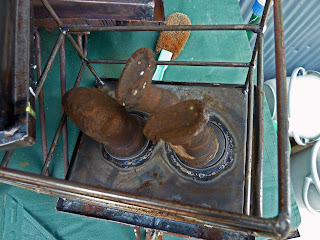 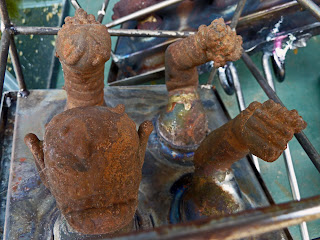 5)The mold is given to the factory that will casts the figures, and they get started! First they have to do some testing of the mold, which results in 'Vinyl Test Pulls" - which are usually done in stock colors (flesh, white, black for example). Once these guys sort out things like the cure time for the mold and the best way to pour and cure the vinyl, they can start pulling figures like mad! And that's where we hit the "Multimedia" portion of our 'lesson' :-P Here is a video that I pulled together with footage from a recent trip I took to Takahashi-san's vinyl factory - near Kamaeri in Tokyo. It's up on YouTube, and it seems to be working just fine, so please enjoy!

What an amazing experience - going and actually watching some really AWESOME toys being made (some of Luke's figures)!!!! And again - thank you Ricky (Velocitron) for making it happen! Here's a little snapshot-sample of what they were making that day ---> 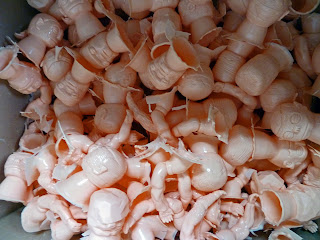 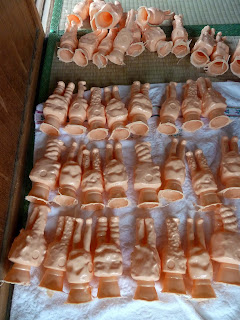 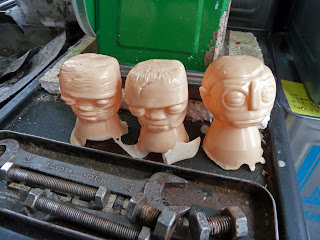 6)The figure is in production! I haven't gotten any shots of the production runs of the Ugly Unicorn (red and yellow casts - coming right up!), but the test shots are in the post bellow! Also, James - over on the Grass Hut Message Bored (spelling is correct!) - put together some cool photoshoped images to get a feel for the colored casts of the Ugly Unicorn, and one thing that isn't doin the previous post is the following picture - which shows the foot-stamps (company name, where it's made and the figure name are all common on foot-stamps. They are either carved into the wax proto or actually 'stamped' on using metal stamps - similar to what are used on a paper printing press) ---> 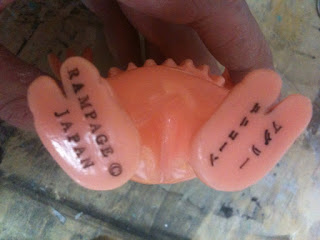 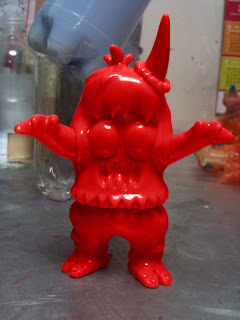 7)Of course then there are all of the other things that follow the actual 'manufacturing' of the solid colored casts. Painting (or hiring out someone to paint for you), finding shops to stock your stuff, going to shows, networking and internetting about your art/toys/figures (however you wish to call them ;-) )... Suffice it to say - it doesn't end here. But this post is ending!

I hope you enjoyed reading about this process! Like I said above - it's been an INCREDIBLE and eye-opening experience to produce my first Japanese sofubi figure! I look forward to painting the coming casts and to making more in the near future!