Hope all are well out in the internets there ;-) RAMPAGE TOYS is plotting away on many new and exciting things - including NEW toys, new ART and new languages! IN anticipation of an upcoming release, I'm trying my very bestest to acquire a bit of Japanese language skill - with hopes of getting some stuff in the Japanese market! They do have the best toys EVER after-all!
So, that covers the new languages bit. Now to the new ART bit (and some pictures - since that's what everyone wants to see anyway!). I finished making a whole bundle of monotypes and stencil prints recently, and here are a couple for your viewing pleasure. The two robots are BIG (2.5 x 3 feet) monotypes. The set-up for these things took over an hour each - and that's AFTER cutting out the stencils. It can all be messed up with one bad pass through the printing press, but these two 'made it out alive.' YAY! This in 'On-Off-Bot in Silver and Black': 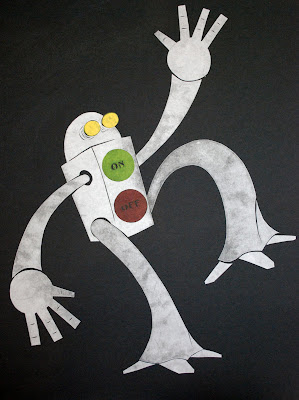 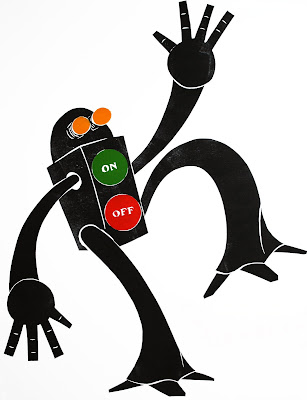 Also, in recent news, the awesome and prolific designer and toy maker UAMOU (Ayako Takagi) and I did a little toy trade - 1 for 1. She got a RAMPAGE TOYS Jelly-O resin toy, and sent a fluorescent orange Uamou vinyl toy (one of her MANY sold-out Uamou designs) my way! Here's a pic of the little guy (left) - along with a couple of his friends: 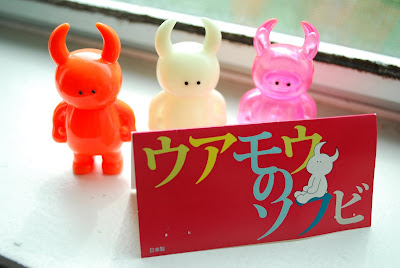 And last but not least- new TOYS - a sneak peak of something new that I'm working on right now (literally!). A new RAMPAGE TOY for release early this summer - and to be sold at the 'Indie Banditas Bazaar' - June 26th 2010 in Port Townsend, Washington - be there! 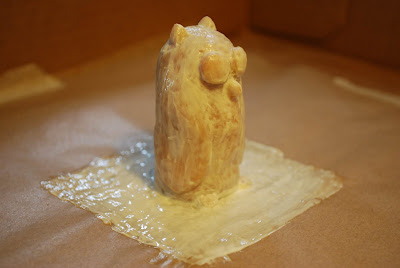