NYCC and Other Great Stuff

YES! Time for new toys!
I recently attended the 2010 New York Comic Con - where the Kapukeki Kaiju was revealed to the public! I didn't sell much... but that's financial info, and not interesting reading material, right?...

Anyway, The Con was AMAZING! There were A LOT of big name toy artists to schmooze with and plenty of toy fans to hang out with as well. I carted around a blank Kapukeeki to show to artists and gauge interest in getting some pro-customs done. Feedback was general super-positive and I'm looking forwar to pursuing these interests in the very near future!

Enough gab though - Here are some pics of the event: 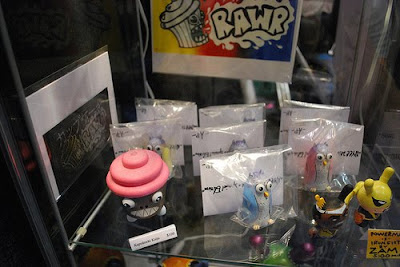 The RAMPAGE TOYS Shelf at the TENACIOUS TOYS booth!!! Thanks to Benny (purveyor of AWESOME via the Tenacious Toys website) for hosting my first 'big' release fig, and for being just all around AWESOME! 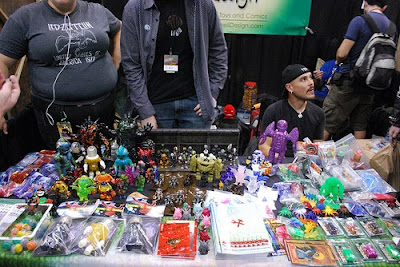 My Favorite place to hang (besides the Tenacious Toys booth!) at the Con! The O'Nell Designs booth had THE BEST toys at the Con! These resin masters were not only fully stockes with amazing toys, but also happened to be the coolest, most friendly artists anywhere! Shout out to Marty (TGB), Paul (Kaiju), Jesse Destasio and Matt - AWESOME!!!

So, NYCC aside, things are rolling along in the RAMPAGE studio. I'm wokring on some acrylic paintings and LOTS of toys for the upcoming "Art of Toys" show at Tasty Art Gallery in Seattle
. I'm also pouring resin and offering blank figures and painted figures via the RAMPAGE BigCartel site and soon via the Custom Toy Union's Webstore! I'm also working on some new ultra-mini resin figures (quasi bootleg - but in a good way :-), and I'll be posting about custom resin and vinyl in the very near future! I digress: here are some photos: 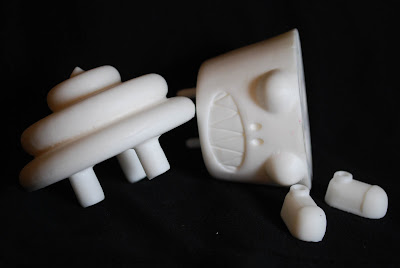 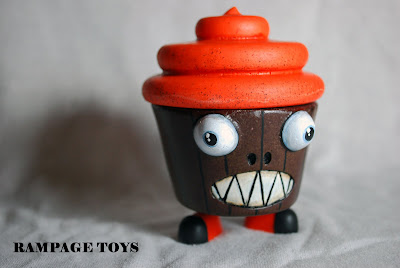 Halloween edition of the Kapukeeki Kaiju Resin Toy! Only 5 will be made - maybe less! They will be made to order. Available here.

Remember these toys from the 80's???? 'Muscle Men' - I think they were called. Well, here's one converted into a Kapukeeki-Lucha toy! All 1.5 inches of AWESOME! Not sure when I'll mold/cast these, but it will happen!


Thanks for checking in! If you want any toys or paintings or anything like that, just e-mail me! I'm psyched on comissions right now, so ask away!
Posted by Jon at 10:44 PM 1 comment: