First up - "Monsters, Cupcakes and Monster Cupcakes" Opening at the CAKESPY SHOP on May 12th. The opening was a blast! Thank you to everyone who came out to check out all the new works - especially to the folks who saw fit to bring a little something home with them! It was a fun evening of cupcakes, wine and artwork. I was especially happy to spend the evening with so many friends, who I won't be seing to much of after I move to Japan... WAIT! "Move to Japan?!?!?" That's right - I'm moving to Japan! THIS Summer! More on that later though (and a VERY exciting new project). For now - here are a few pics of the CAKESPY opening 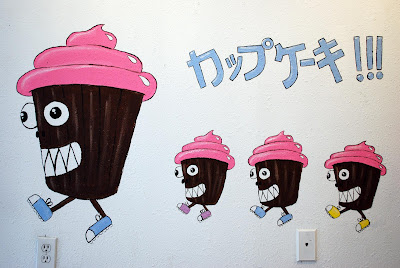 Wall Mural Action!!! I decided to do it up right for this event - and figured a nice 3'x6' Wall Mural would do well to bump up the aesthetics a notch. 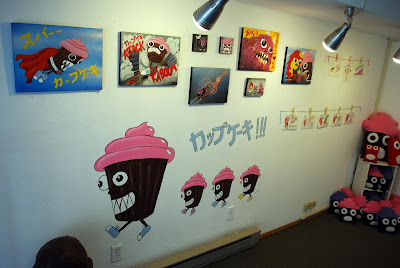 Artwork (to be pronounced 'ahhht-woork' of course) Hanging and FOR SALE. The pieces should be available from CAKESPY on-line (e-mail cakespyshop@gmail.com for inquiries). More up on Flickr soon as well. 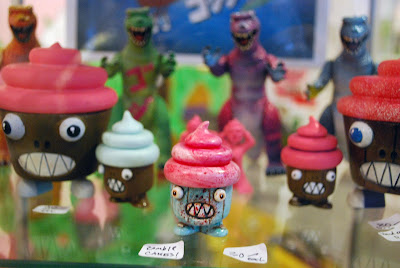 There were TWO zombie cakes... one was eaten... or was he eating brains... or something... Anyway. RAWR! Some resin and customs.

In other news, a couple weeks ago I had the pleasure of attending the "Sloth 'n Moth" opening at Grasshut in Portland Oregon. What a blast! Bwana Spoons was a splendid host, and he even delivered a new painting to me - SWEET! While at the hut I dropped of a few more resin pieces, so if you're in Portland, and you want to get your hands on the LAST TWO available "Flex Packs" (from the release edition - a new edition is in the works - fleshtone anyone? ;-), then go grab 'em! Anyway... 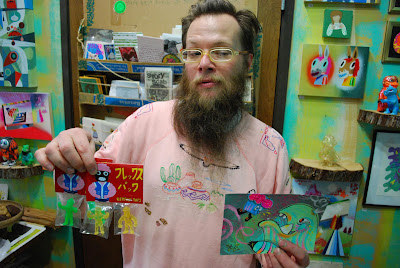 Bwanashowing of my new painting (SOOOO AWESOME), and the Flex Packs for the shop. 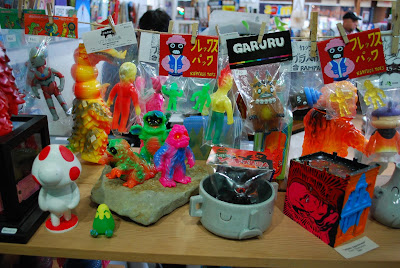 Some RAMPAGE TOYS bagged and carded resin up for SALE in the Grasshut Shop!!! Proud to be mixed in with some S7 and Buta no Hana Sofubi!

AND, some new stuff!!! Buddha V2.0!!! These guys were cast up with a few other for the CAKESPY opening, and I'll get a batch up in the shop soon! 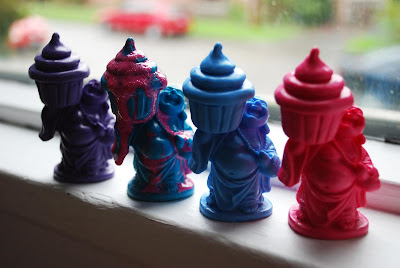 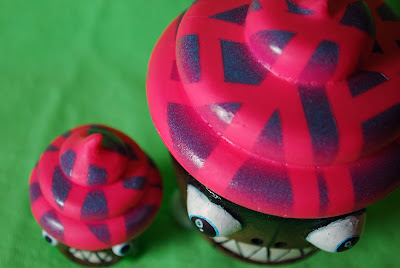 ...a glimpse of 2 of my 3 pieces for the upcoming TAG "Open Call Resin Show"! More pics on Flickr.

Another post will be soon in the coming. Info about Japan and this 'exciting new project' soon soon soon!!!